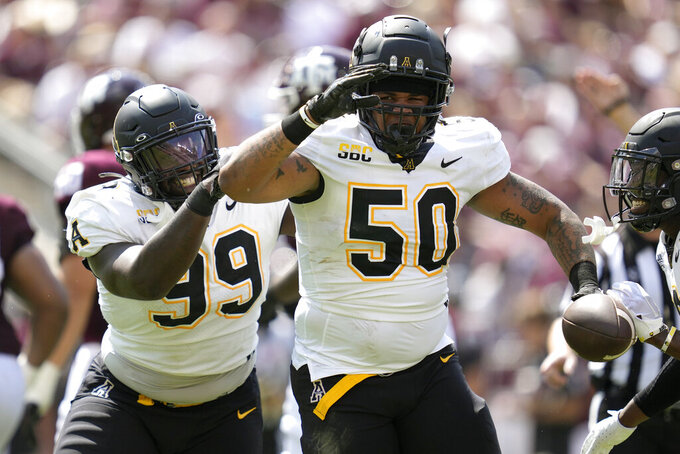 The basketball-crazed state of North Carolina has something other than college hoops to get excited about.

It turns out its football teams are pretty good, too.

For the first time ever, the state’s “Big Four” Atlantic Coast Conference schools — North Carolina, North Carolina State, Wake Forest and Duke — have all started the season at least 2-0. They're a combined 9-0 with five road wins so far.

Then there's Appalachian State of the Sun Belt Conference. The Mountaineers are riding high after a 17-14 win at then-No. 6 Texas A&M on Saturday, another eye-catching upset coming 15 years after the former Championship Subdivision team stunned No. 5 Michigan at the Big House.

This year's win sent App State students racing onto King Street in the rain in Boone and jumping into Duck Pond on campus to celebrate.

“It was crazy seeing that on Twitter and Instagram,” Mountaineers quarterback Chase Brice said. “I wanted to be there celebrating and enjoying that moment with the students. It’s great to see that passion and love for our school. For us to be able to bring that back to Boone was pretty cool.”

It also prompted ESPN’s College GameDay to call an audible. Instead of going to College Station for Miami-Texas A&M, the show will make the trek up the mountain to Boone for the first time as the Mountaineers host Troy on Saturday.

“It's a very big win for our program,” said coach Shawn Clark, who received more than 400 text messages after the Texas A&M win. “And this is a great opportunity to show off Boone and the culture and tradition that we have."

“He was so excited during that game,” Doeren said. “Really tremendous amount of respect and love for that staff, and the experience my son’s had there as a student has been very, very positive. So (it’s) great for Boone and that community.”

The Mountaineers (1-1) have already had a crazy season. They lost at home to North Carolina 63-61 in arguably the wildest game of the season so far in front of a record crowd of 40,168 at Kidd Brewer Stadium. There were 62 points scored in the fourth quarter. It marked UNC's first trip to Boone.

In a game going on simultaneously, N.C. State needed a little luck to escape at East Carolina 21-20 in another emotional matchup that generated statewide buzz.

Just last year, the Wolfpack and Demon Deacons met as ranked teams in a November matchup that largely determined the ACC's Atlantic Division race. They’re at it again behind experienced quarterbacks, with preseason league player of the year Devin Leary at N.C. State and Sam Hartman at Wake Forest, which won 11 games and reached last year's ACC title game.

At UNC, first-year starter Drake Maye is off to a fast start (930 yards, 11 TD throws) in replacing record-setting quarterback Sam Howell for a 3-0 team. Robert Griffin III, the 2011 Heisman Trophy winner, even listed Maye as one of five frontrunners to win this year's honor.

And Duke's Mike Elko is bringing excitement back to Durham in his first year as a head coach. He was entrusted with revitalizing a program that had seen its long run of success under David Cutcliffe fizzle in the past two seasons.

One of Elko’s tasks has been meeting with student groups in attempt to bring some of the rabid energy from the “Cameron Crazies” student section at men’s basketball games to Wallace Wade Stadium on football Saturdays. The Blue Devils opened with a 30-0 win against Temple in front of more than 20,000 fans for their first shutout of a Bowl Subdivision opponent in nearly 33 years, followed by last weekend’s win at Northwestern.

“I think as we try to sell what Duke football can become in the community, on campus, in the Durham area, I think every success we have is critical,” Elko said “So to that respect for sure, 2-0 is not lost on me. I know that was a huge win from a momentum standpoint for our program.”

If this keeps up, it could be a memorable season long before basketball tips off.