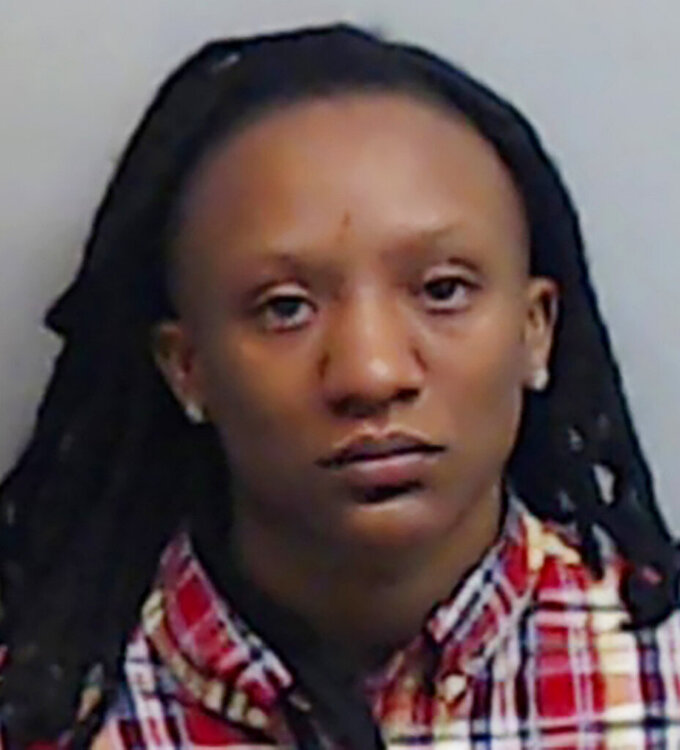 In this Nov. 2019 photo released by the Fulton County Jail, Kennesaw State basketball player Kamiyah Street poses for a booking photo, in Atlanta. Street is one of five people indicted in the July killing of a man found dead in an Atlanta parking deck. A Fulton County Sheriff's Office spokeswoman said Street turned herself in Thursday, Nov. 21, 2019. She remained in the county jail Monday without bond. (Fulton County Jail via AP)

ATLANTA (AP) — A starting point guard for a Georgia university women’s basketball team is one of five people indicted on charges including murder in the July killing of a man who was found shot to death in the parking deck of an Atlanta apartment complex.

The university’s athletic department said in a statement that once it found out about her arrest Thursday, Street was “suspended indefinitely” from all team and athletic activities.

Street remained in the Fulton County jail Monday without bond. Online court records did not list an attorney who could comment on her behalf. Her arraignment was set for Dec. 13.

Street and the four men named in the indictment all face charges including murder, felony murder, attempt to commit armed robbery, aggravated assault with a deadly weapon and possession of a firearm during the commission of a felony.

Atlanta police said in an emailed statement that officers responded around 1:45 a.m. on July 16 to a report of a person shot and found Nashiem Hubbard-Etienne, 21, dead in the parking deck. Preliminary information indicates it may have been a “targeted shooting,” and the investigation is ongoing, the statement says.

Police investigators were able to identify and secure warrants for the four men in Hubbard-Etienne’s death, Atlanta police Sgt. John Chafee wrote in an email. The decision to also charge Street was made by the Fulton County district attorney’s office, Chafee wrote.

District Attorney Paul Howard said in an emailed statement Monday that police had identified Street by reviewing surveillance video, and when she was questioned she admitted her presence and participation in the death. Police recognized that some form of immunity would be necessary if she was to serve as a witness for the state and forwarded the case to prosecutors.

An independent investigation of the shooting and its circumstances “clearly indicated Street’s involvement with the death,” Howard said.

The 14-count indictment says Hubbard-Etienne was shot to death during an armed robbery attempt and also says at least one shot was fired at a second man. The indictment does not say who fired the shots, but all five defendants are charged with murder and felony murder, both of which carry an automatic sentence of life in prison.

Banks, Gilstrap and Wells were all in the Fulton County jail with no bond set.

Banks was arrested July 22. An email or functioning phone number for his attorney could not immediately be found.

Wells was arrested July 26. His attorney, Charles Rooks, wrote in an email that Wells “maintains his innocence in this unfortunate death.” He declined to comment further.

Gilstrap was arrested Aug. 12. His attorney did not immediately respond to an email Monday seeking comment on the charges against him.

Brantley was not in jail Monday and no attorney was listed for him in online court records.