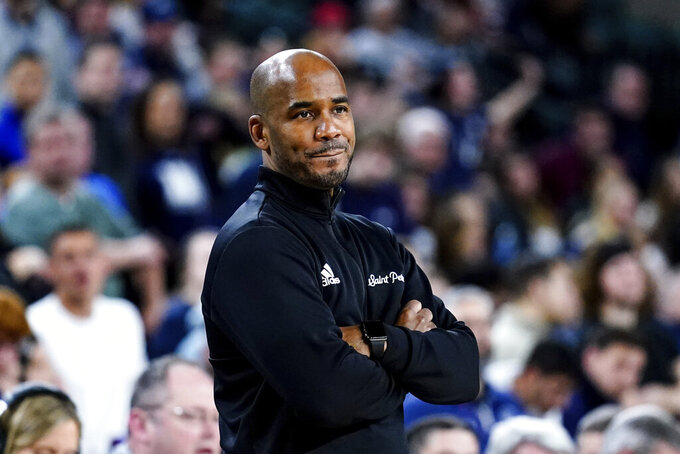 NEWARK, N.J. (AP) — While Shaheen Holloway is probably to coach a lot big games at Seton Hall over the next few years, none may pull at his heart as much as the one this weekend.

Saturday will be the first time Holloway coaches against Saint Peter's, the tiny New Jersey university whom he took on a magical run in the NCAA Tournament that ended with a loss to national runner-up North Carolina in the Elite Eight.

It was a true Cinderella story, a small school from the Metro Atlantic Athletic Conference knocking off the likes of Kentucky, Murray State and Purdue to become the the first No. 15 seed to reach the regional final. The school store ran out of Saint Peter's merchandise, and the university in the shadow of New York City saw an increase in financial donations and applications.

But days after the run ended, Holloway accepted the head coaching job at Seton Hall, where he played in the late 1990s into 2000 and had been an assistant.

Holloway has tried not to say much about facing Saint Peter’s, where he coached for four seasons. Once he got the at Seton Hall, the schools dropped each other from the schedule after decades of facing each other annually.

“It’s like every other game,” Holloway said after the Pirates opened the season with a win over Monmouth on Wednesday. “There’s no difference for me, man. I’m locked in right now, I’m just worried about our guys getting better every time we step on the court. It doesn’t matter who we play against.”

Holloway won't be seeing a lot of his former Peacocks players Saturday at the Prudential Center. Most of them used to transfer portal to attend other schools.

Saint Peter’s opened the season with a 73-59 win over NJIT. Freshman forward Corey Washington had a team-high 18 points. The Peacocks scored the first 17 points and never looked back.

“It’s going to be an emotional game, but knowing (Holloway), he’ll want us to just keep working to get the next win,” Seton Hall forward Tyrese Samuel said.