Plans finalized to have 40 teams in Mohegan "Bubbleville" 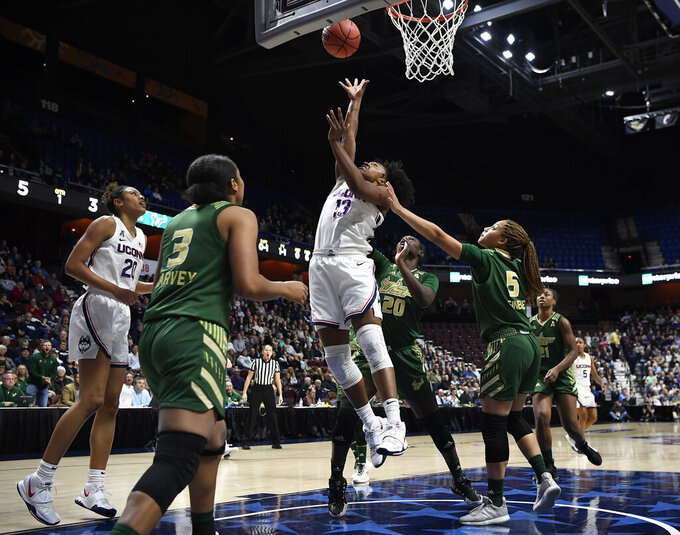 FILE- In this March 8, 2020 file photo, Connecticut's Christyn Williams makes a basket as South Florida's Elena Tsineke, right, defends during the first half of an NCAA college basketball game in at Mohegan Sun Arena in Uncasville, Conn. Final plans were announced Thursday, Nov. 12, 2020, for 11 days of college basketball in November, inside a modified bubble at the Mohegan Sun resort casino. (AP Photo/Jessica Hill, File)

UNCASVILLE, Conn. (AP) — Final plans were announced Thursday for 11 days of college basketball this month inside a modified bubble at the Mohegan Sun resort casino in Connecticut.

The event, dubbed “Bubbleville” will include 40 teams playing 45 games in tournaments that were either relocated or created to be played at the resort between Nov. 25 and Dec 5.

The event was organized by he Naismith Memorial Basketball Hall of Fame, which holds its men’s Tip-Off Tournament and Women’s Challenge at Mohegan Sun every year, and the Gazelle Group, which runs the Empire Classic and the Legends Classic, both of which are normally held in New York.

The Mohegan Sun had already developed protocols for coronavirus testing, cleaning and managing sports during the pandemic. It also has its own medical staff and facilities to treat and isolate anyone who may be infected.

The resort teamed with Viacom over the summer to produce televised events for boxing and mixed martial arts.

Each team will be tested upon arrival. Each school will have its own secured floor in the resort’s 34-story tower hotels along with meeting and catered dining areas.

The teams will move around through designated “back of the house” corridors so they don’t interact with the public.

The organizers plan to use a pool of about 25 officials, who also will be housed at the resort for those two weeks.

The casino had already installed safety devices as part of its reopening in June, including ultraviolet lighting and special filters in its HVAC system.

“It’s a single site, secluded location, with enormous square footage for social distancing,” Greg Procino, vice president of basketball operations for the Hall of Fame, told The Associated Press last month. “There are a lot of things that will work in our favor,

The organizers are not planning to allow fans at the games.

Schools involved include men's No. 2 Baylor, No. 3 Villanova, No. 4 Virginia, No. 18 Arizona State and No. 20 Oregon. The women's programs competing are scheduled to include No. 3 UConn, No. 5 Louisville and No. 6 Mississippi State.

Most of the games will be played at the 10,000-seat Mohegan Sun Arena, the home of the WNBA's Connecticut Sun. Other's will take place in the resort's 125,000-square-foot exposition center which will house several courts that also will be used as practice facilities.