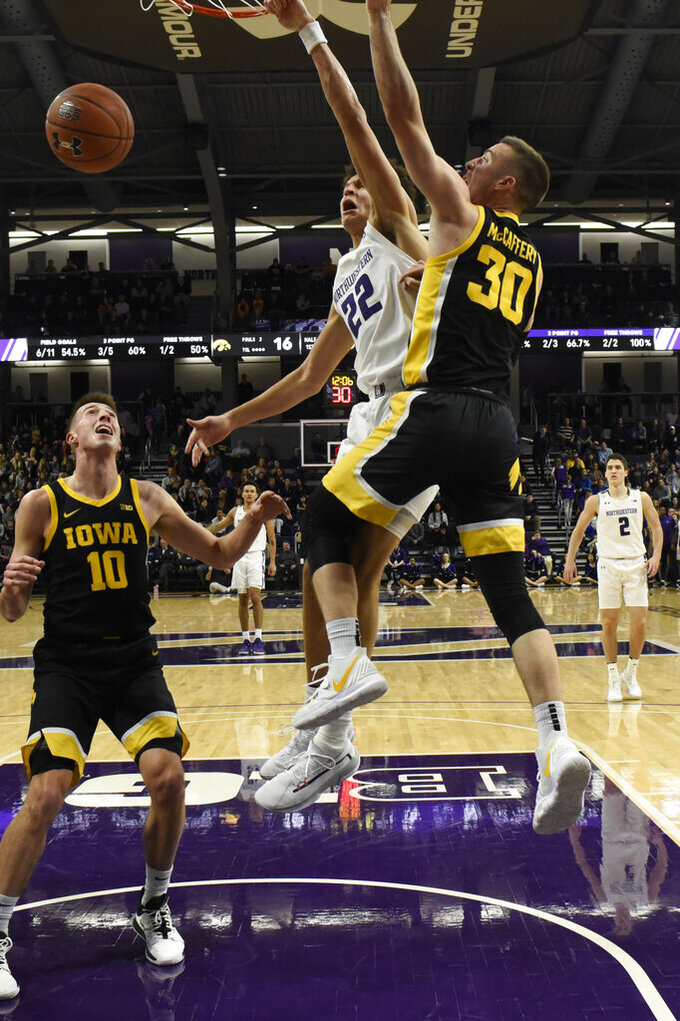 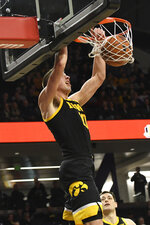 EVANSTON, Ill. (AP) — Luka Garza scored 27 points — all but one of them in two spurts —and Iowa beat Northwestern 75-62 on Tuesday night.

Garza, the Big Ten scoring leader, hit his first four shots to account for Iowa’s first 10 points — and all of his in the first half — but didn’t connect again until hitting a layup 8:54 into the second. The junior center then scored the next 16 straight for Iowa to help the Hawkeyes break open a tight, often plodding game.

Garza finished 10 for 14 from the floor, hit two of three 3-pointers and helped buoy Iowa’s 47% shooting for the game. He entered averaging 22 points.

Iowa led 41-35 following a mostly back-and-forth and close first half. The Hawkeyes' seven-point lead with 1:53 left was the biggest by either team in the opening 20 minutes.

Iowa shot 54% from the floor and was 8 of 15 on 3-point attempts in first half. Northwestern went through cold stretches and shot just 36%. Kopp, who led with 14 points after 20 minutes, was the notable exception going 5 of 11 from the floor, including two 3’s.

Garza was 4-for-4 from the floor, including two 3s, in the opening 3:50 in to give Iowa a 10-9 lead. He missed his next three shots and was quiet for the rest of the period has he played 14 minutes in the half and 24 for the game,

The pace didn’t pick up early in the second half. Neither team scored until Northwestern's Robbie Beran hit a 3-point jumper 3:15 in. Iowa was especially cold, hitting just 4 of its first 14 shots in the period while it tried to nurse a lead.

After finally connecting again, Garza scored 16 straight points midway through the second half to open Iowa’s lead to 69-51. He capped the run with a jumper with 5:01 left.

Iowa: The Hawkeyes needed this win in their only regular-season game against Northwestern to hold their ground in the middle of the Big Ten standings.

Northwestern: The Wildcats fell short —and into last place in the Big Ten — following a 62-57 win over Nebraska on Saturday that ended a five-game slide.

Northwestern: The Wildcats will play at Illinois on Saturday afternoon.