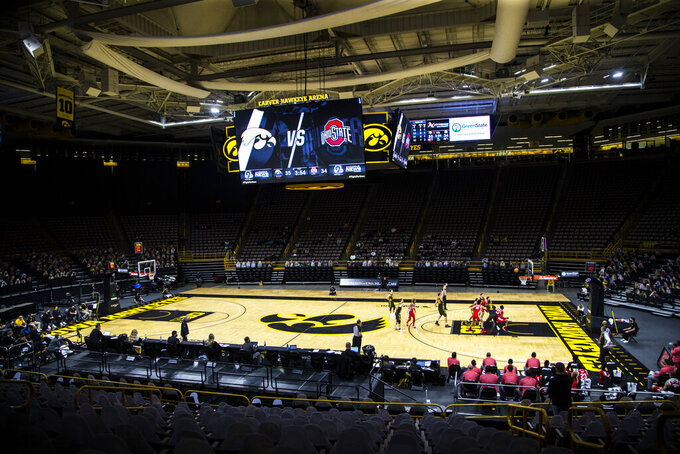 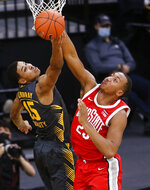 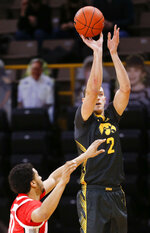 IOWA CITY, Iowa (AP) — No. 7 Ohio State spent part of its time before its game at No. 8 Iowa stuck in the snow.

A blizzard that shut down several highways in the state hit as the Buckeyes were heading to the arena for a late-morning shootaround, and when the team left to head back to its hotel, the bus couldn’t get up the hill outside of the arena.

“We had to call the plow people to come in and plow for us,” Ohio State guard Duane Washington Jr. said. “It was just kind of a wrench in the road that was going to make us go even harder.”

The Buckeyes found themselves stuck offensively for a stretch in the second half against the Hawkeyes. But they found another gear, rallying from an 11-point deficit to beat Iowa 89-85 on Thursday night.

Washington, E.J. Liddell, and Kyle Young each had 16 points as the Buckeyes (15-4, 9-4 Big Ten) moved into a tie for second place in the Big Ten with Illinois, one game behind Michigan.

The Buckeyes scored 38 points in the final 14:29, but it was that 45-minute wait in the snow that Washington said might have made the difference.

“We talked about who the top 10 shooting guards were in the NBA,” Washington said. “And it was a great conversation. I think we built up that animosity for the game.”

“They had a good time with it,” Ohio State coach Chris Holtmann said. “Duane leads the charge there in the back of the bus with those kinds of discussions.

“I think, maybe, this group has a really special way about them. Perhaps in some ways that galvanized us.”

The Buckeyes needed something when Iowa went up 61-50, and they responded with a 17-5 run to take the lead.

“We knew they were going to make some runs,” Holtmann said. “We had to be able to weather some runs, and find a way to score ourselves. I think if you can’t score against them, you’re not going to beat them. Our guys played with great poise, particularly when we were down, and for that I’m the most proud.”

Ohio State held Iowa to one field goal over the final 4:16. The Buckeyes were the ones with the big shots.

Justin Ahrens had three 3-pointers in a span of two minutes late in the game after going scoreless to that point, his last one coming at the 2:39 mark to put Ohio State up 88-81.

“I think at that point, we weren’t as active in our defensive slides,” Iowa coach Fran McCaffery said. “Give them credit, they made their shots.”

“They put him in such great spots, and move him around,” Holtmann said. “We mixed up our coverages. He had to have a body on him, because he’s the most difficult matchup in the country.”

Justice Sueing had 12 points and 11 rebounds for the Buckeyes.

Iowa guard CJ Fredrick, who has started 16 games this season, missed the game with a lower leg injury. Fredrick sat out the Jan. 29 game at Illinois, but started and played 11 minutes in Tuesday’s 84-78 win over Michigan State. Fredrick, who averages 8.7 points per game, is shooting 50% (26 of 52) on 3-pointers this season.

Iowa had a 10-0 scoring run in the first half. It was the 20th time this season the Hawkeyes have scored 10 or more consecutive points in a game.

The Buckeyes added to their resume with their fifth win in six tries against teams in the AP Top 25, and it was their fourth consecutive road win over a top-15 team. The Hawkeyes, who are in the middle of a stretch of four games in eight days, dropped two games behind Big Ten-leading Michigan.

Ohio State: At Maryland on Monday.

Iowa: At Indiana on Sunday.