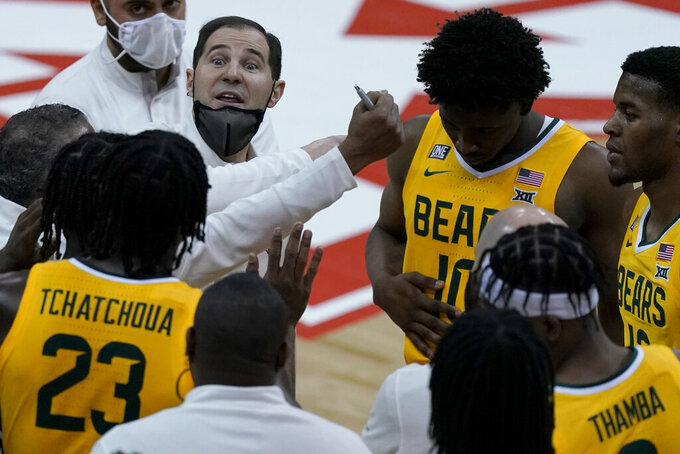 Baylor head coach Scott Drew talks to his team during the second half of an NCAA college basketball game against Oklahoma State in the semifinals of the Big 12 tournament in Kansas City, Mo., Friday, March 12, 2021. (AP Photo/Charlie Riedel)

This time, the Bears will have a shot to do it with their first-ever No. 1 seed.

Second-ranked Baylor (22-2) headlines the South Region and opens against 16th-seeded Hartford, the America East Conference champion. The Bears had never been higher than a No. 3 seed previously, the last time coming in 2017.

Drew has guided the Bears to two regional finals but never to a Final Four in his first 17 seasons.

"It means that people think the accomplishments are worthy of a No. 1 seed,” Drew said Sunday night. "It means people appreciate what (players) were able to achieve for the year. So there's always a lot of pride in being able to get a No. 1 seed.

“It doesn't necessarily guarantee you're going to be successful in the tournament, which we all know. ... Seeding numbers don't matter, it's who plays best in that 40 minutes.”

Led by the backcourt of Jared Butler and MaCio Teague, the Bears won their first regular-season conference championship since 1950, though they were upset by Oklahoma State in the Big 12 Tournament semifinals. They finished atop the Big 12 despite a three-week pause related to COVID-19 concerns, followed by struggles coming out of that break that included barely beating an Iowa State team that finished with two wins and its only regular-season loss against Kansas.

Baylor was ranked No. 2 in every AP Top 25 poll this season except one, when it spent a week at No. 3.

“I never was one of those kids that imagined to be like the one-hit wonder or what not," Butler said. “For me, I’m excited we’re a 1-seed. I feel like we’re in a great spot. I don’t care if it’s a Cinderella story or we’re expected to win. Winning is the most important thing.”

Here are things to know about the South Region, with all first-round games taking place Friday:

Ninth-ranked Ohio State is the No. 2 seed in the South after losing in overtime to Illinois in Sunday’s Big Ten Tournament final. Chris Holtmann's Buckeyes (21-9) started the year ranked 23rd but spent the last six weeks of the season inside the top 10 — peaking at No. 4 for three weeks in February.

“I feel really good about this group," Holtmann said. "But we are climbing, and we are still climbing. And we're trying to stay in the moment as much as possible.”

Eighth-ranked Arkansas is the 3-seed, followed by No. 20 Purdue and No. 14 Villanova to round out the top five.

Fans wanting high-scoring offense should probably tune in for the matchup between Arkansas and 14th-seeded Colgate.

The Razorbacks (22-6) are averaging 82.4 points to rank seventh nationally, with Moses Moody (17.4 points) leading the way.

When his eighth-seeded Tar Heels (18-10) face ninth-seeded Wisconsin, Williams will look to improve to 30-0 in first-round NCAA Tournament games. That includes his 15-year tenure at Kansas, as well as his first 17 years at his alma mater.

The Big 12, Big Ten and Southeastern Conference combined to take six of the top seven seeds in the South bracket.

The Big Ten had Ohio State and fourth-seeded Purdue, led by Trevion Williams (15.6 points and 9.0 rebounds). The Big 12 has Baylor and sixth-seeded Texas Tech, while the SEC has Arkansas and No. 7 seed Florida.

Further down, the ACC also had two teams with the Tar Heels and No. 22 Virginia Tech, which checked in as a No. 10 seed.

The 6-foot-1, 165-pound sophomore is averaging 24.2 points for the Golden Eagles, who are the 15-seed and will open against Ohio State. He led the program to the Summit League title and its first NCAA bid since 2008.

Abmas, who had 42 points against South Dakota State on Feb. 13 and 41 against Western Illinois two weeks later, is the only player in Division I to have had crossed the 40-point mark twice this year.

This story has been corrected to show Baylor's loss to Kansas was its only loss of the regular season, not its only meeting against Kansas.