Bears out of woods to No. 1 with 5 coming together at Baylor 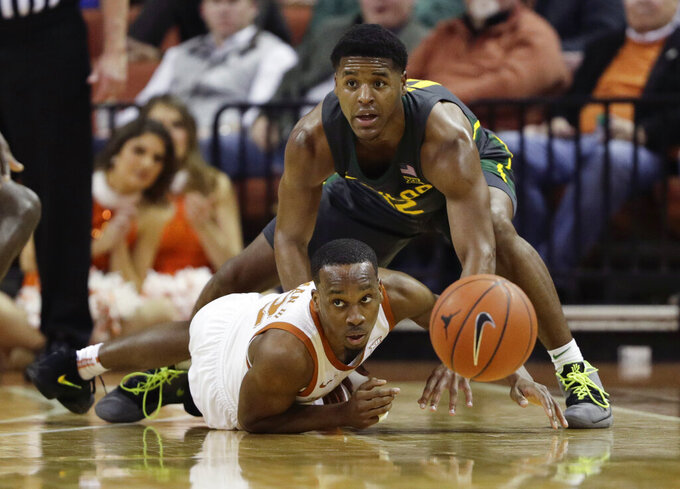 WACO, Texas (AP) — MaCio Teague prefers all the time spent in the gym bonding with his Baylor teammates more than that weekend camping trip.

“Actually my least favorite thing that I've done since I've been here,” Teague said, prompting a chuckle from teammate Freddie Gillespie as he discussed the team retreat that came soon after he transferred to Baylor before last season.

“We all get on the bus and then we pull up and it's the woods, and they say give us your phones,” Gillespie said. “We get out there, and they said, here's some tents, and we spent a long weekend in the woods."

Long after coming out of the woods, the top-ranked Bears — and their top five scorers, who all began college elsewhere — have certainly come together.

Baylor (22-1, 11-0 Big 12) has won a school-record 21 games in a row since blowing a 10-point lead against Washington in the final five minutes of its only loss, back during the first week of the season. The Bears lead the Big 12 with their longest conference winning streak ever, and have been No. 1 in the AP Top 25 four weeks in a row after so much volatility at the top of the poll before that.

Guards Jared Butler, Davion Mitchell, Devonte Bandoo and Teague had never all played in a game together before this season.

Gillespie, the gregarious 6-foot-9 senior center, played two seasons at Division III Carleton College in Minnesota before transferring to Baylor. He had to sit out in 2017-18, when the Bears missed the NCAA Tournament for the first time in five years.

That same season, Butler was still in high school and headed to Alabama, Teague was a sophomore at UNC-Asheville, Mitchell a freshman at Auburn and Bandoo was at a community college in Kansas. Teague and Mitchell had to sit out last season following their transfers.

Now they make up one of the best group of guards in the country.

“It took a lot of workouts, a lot of time talking to each other, speaking to each other, going out to dinner and workouts, seeing what each other likes to do on the floor and 1-on-1, 5-on-5 pickup,” Teague said. “It doesn't happen overnight, but I feel like at this point this season we're coming together and we're still building chemistry and we still have a lot of potential.”

Teague said a lot of the bonding came in lengthy conversations in the locker room after hard workouts, and he considers those some of the best memories so far.

Butler, Teague and Mitchell have started every game for Baylor, and Bandoo has made 43% of his 3-pointers coming off the bench. Each has led the team in scoring in games this season.

Butler, who is sixth in the Big 12 with 15.0 points per game, enrolled at Alabama in the summer of 2018 before transferring to Baylor that August. He got an NCAA wavier for immediate eligibility.

“When you play the game and you’re enjoying it when someone else is having success, it makes the game so much fun," Butler said. “And when you're winning.”