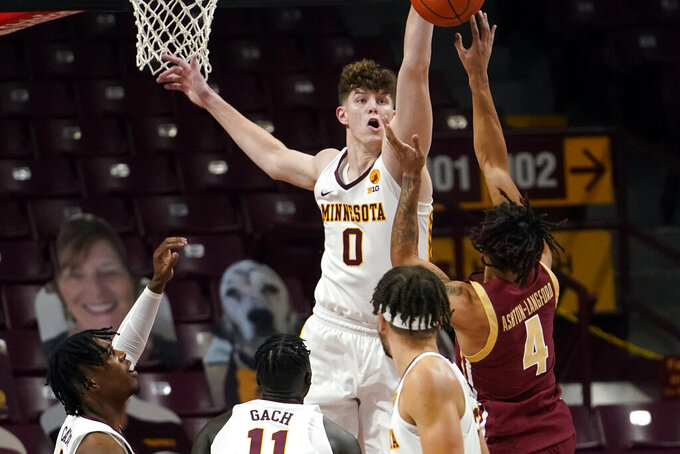 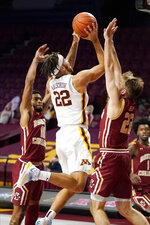 MINNEAPOLIS (AP) — Marcus Carr scored nine of his 22 points in overtime, Both Gach had 16 points and nine rebounds, and Minnesota rallied from a 15-point deficit to beat Boston College 85-80 on Tuesday night as part of the Big Ten/ACC Challenge.

Carr, who entered the game averaging 26.5 points (No. 6 nationally), had only two points in the first half. Liam Robbins added 14 points and eight rebounds and freshman Jamal Mashburn Jr. scored a season-high 10 points for Minnesota (5-0).

Wynston Tabbs hit four 3-pointers and finished with 24 points for Boston College (1-4), which has lost three in a row. Jay Heath had 16 points and Rich Kelly scored 10.

Carr made a jumper and a layup before Gach added another layup to give the Golden Gophers a five-point lead with 42 seconds left in OT. BC's Makai Ashton-Langford answered with a layup six seconds later but Minnesota hit 7 of 8 from the free-throw line — with Carr making 5 of 6 — from there to seal it.

Robbins made a pair of free throws with 1:35 left in the second half, giving the Gophers a 70-68 lead. Isaiah Ihnen missed two foul shots that could’ve sealed the game, and Ashton-Langford followed with the tying layup on the other end to force overtime.

The 6-foot-6 Gach, a native of Austin, Minnesota, scored 10 points in the final eight minutes of regulation. The junior, who transferred from Utah, is averaging 15.6 points and has scored in double figures every game this season.