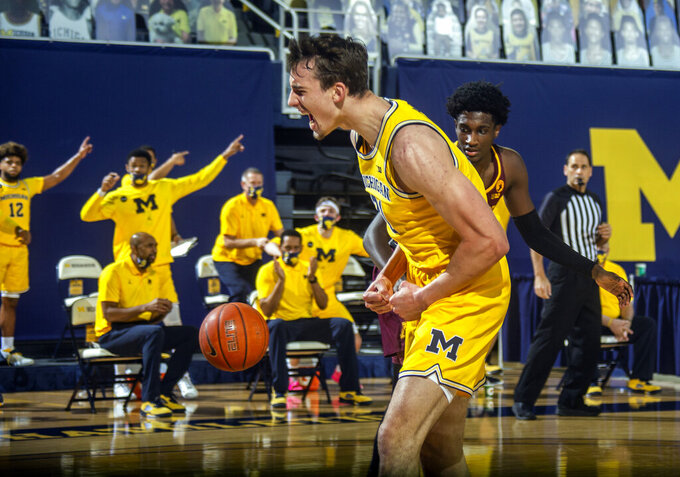 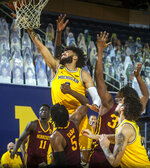 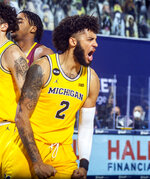 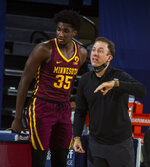 ANN ARBOR, Mich. (AP) — Hunter Dickinson has deflected credit for his sensational season to teammates and coaches, refusing to bask in glory after scoring in double digits in every game and being the leading scorer for an undefeated team.

After his latest impressive performance, he credited Michigan strength and conditioning coach Jon Sanderson for helping him get ready for the season and to thrive during it.

Dickinson scored a season-high 28 points as the 10th-ranked Wolverines pulled away and beat No. 16 Minnesota 82-57 on Wednesday night to remain unbeaten.

The 7-foot-1, 255-pound freshman center said Sanderson pushed him a lot in the summer to get stronger and hasn't let up.

“The thing that has helped me the most is lifting in the season," Dickinson, who attended DeMatha Catholic in Maryland, said to reporters on a Zoom call. “In high school, I didn’t really lift at all. I’m going to lift right now after this."

Michigan coach Juwan Howard said when he came back to the school he attended — and was a member of the Fab Five in the early 1990s — hiring Sanderson was the first decision he made on the staff he wanted around him.

“He's a huge part of our team's success," said Howard, who is in his second season as a head coach after playing in the NBA and working as an assistant coach with the Miami Heat.

Dickinson led the way before and after halftime, making 12 of 15 shots and grabbing eight rebounds. Entering the game, he was making 72% of his shots.

“I’ve never seen a kid shoot those type of percentages," coach Richard Pitino said. “Everything just kind of dies into the basket.”

Minnesota made just 32% of their shots, and only Marcus Carr scored in double figures. Carr, though, was 5 of 16 from the field and was held to 14 points after entering the game averaging 22-plus points.

“And defensively, we didn’t do a great job on them. So, it’s a bad combination.”

Isaiah Livers scored 14 points and Franz Wagner had 12 points for the Wolverines, who made 57% of their shots. Michigan finished with 13 turnovers after a flurry of giveaways in the first half allowed the Gophers to stay close for 20 minutes.

Michigan guard Eli Brooks lost a tooth on a collision with Minnesota's Isaiah Ihnen and was being treated by a dentist before the game ended.

Howard said Brooks put his head in harm's way to go after a loose ball.

“I've seen a lot of players that will stop and back up and let the opponent grab the basketball," Howard said.

The undefeated Wolverines should get consideration to be ranked higher in the AP Top 25 with seven teams ahead of them that have at least one loss, including four with two setbacks. If the Gophers don't pull off an upset at No. 5 Iowa on Friday night, they may plummet out of the poll.

“Michigan’s got as much talent as any team in the country that I’ve seen," Pitino said. “”I think Juwan’s doing a really good job of getting them bought in.”

Minnesota: To contend in the Big Ten, the Gophers have to figure out how to overcome their road woes. They fell to 0-3 away, and each setback has been by double digits. Minnesota is 10-0 at Williams Arena.

Michigan: Dickinson is becoming a star that is tough to top. Expectations were modest for him entering the season, but he has become one of the Big Ten's top players with the way he makes shots and alters them on defense.

Minnesota: The Gophers play the Hawkeyes on the road Sunday. Minnesota won the previous matchup at home in overtime.

Michigan: The Wolverines will be idle for nearly a week because Penn State has paused activities due to positive tests for COVID-19 within the program. Their previously scheduled matchup on Saturday was postponed to a date to be determined. Michigan's next schedule game is Tuesday at home against No. 8 Wisconsin.