Dosunmu gets hot late, No. 6 Illinois tops Nebraska in OT 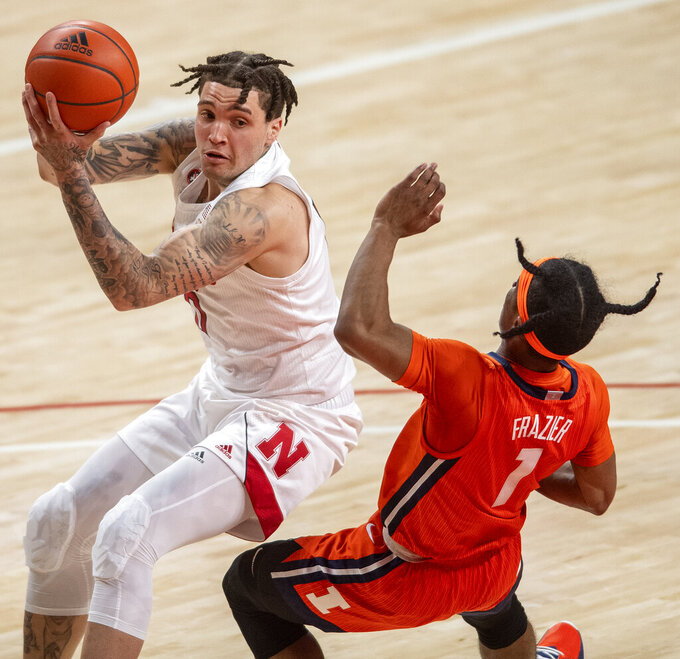 Nebraska guard Teddy Allen (0) knocks over Illinois' Trent Frazier (1) as he drives to the basket during the first half of an NCAA college basketball game on Friday, Feb. 12, 2021, in Lincoln, Neb. (Francis Gardler/Lincoln Journal Star via AP) 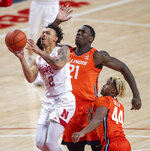 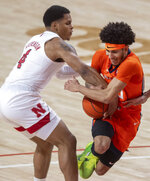 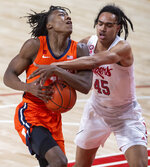 LINCOLN, Neb. (AP) — Ayo Dosunmu scored the last 10 points in regulation for Illinois and the first five in overtime, allowing the sixth-ranked Fighting Illini to turn back Nebraska's upset bid and win 77-72 on Friday night.

Dosunmu, who had 22 of his 31 points after halftime, tied it at 66 with his driving lay-in with 20 seconds left in regulation. Nebraska's Trey McGowens failed to get a shot off at the buzzer, and Dosunmu opened overtime with a layup and 3-pointer to send Illinois to its fifth consecutive win.

Lat Mayen had 16 points, including a couple late 3-pointers, and Teddy Allen and Trey McGowens scored 15 apiece for the Cornhuskers. Nebraska (4-12, 0-9) lost its 26th straight against Big Ten opponents.

Illinois was a 14-point favorite, but this game was anything but easy. Nebraska led 64-58 with under three minutes left.

Dosunmu made two free throws, drove the length of the court for a layup and made two more free throws to tie it. After Dalano Banton scored with 37.8 seconds left to put Nebraska up, Dosunmu tied it with another layup.

Nebraska called a timeout and had a chance to win it on a final shot in regulation. McGowens got hung up between Trent Frazier and Dosunmu and couldn't get off a decent shot, with Huskers coach Fred Hoiberg throwing his facemask to the floor in frustration.

Illinois: Dosunmu had been so-so for most of the game. But as elite players do, he stepped up when his team needed him most and sent Illinois to its fourth straight road win.

Nebraska: The Huskers played one of their best games at a point when they could have cashed in for the season. They are in the middle of a stretch of playing eight games in 14 days.