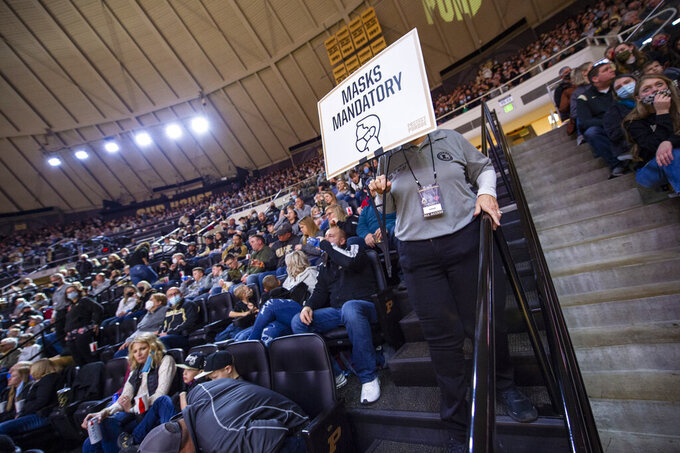 An usher patrols the aisles with a "masks mandatory" sign as a reminder to fans during the second half of an NCAA college basketball game between Purdue and Nicholls State, Wednesday, Dec. 29, 2021, in West Lafayette, Ind. (AP Photo/Doug McSchooler) 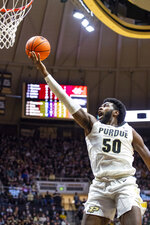 WEST LAFAYETTE, Ind. (AP) — Zach Edey grew up in Canada playing baseball and hockey and didn't play basketball until he was a high school sophomore.

Now a sophomore at third-ranked Purdue, the 7-foot-4 Edey is the first to admit he had a lot to learn last season.

Purdue (12-1) shot 57.4% and cracked 100 points for the first time this season in its final nonconference game.

Ivey was 5-for-9 from the field. Also scoring in double figures for the Boilermakers were Isaiah Thompson (15 points), Sasha Stefanovic (14) and Mason Gillis (10).

“We just wanted to be aggressive in transition and when we got good looks we were able to knock them down,” Thompson said.

Ty Gordon led Nicholls State (8-6) with 29 points, hitting 9 of 15 3-pointers. Ryghe Lyons scored 20 points and Lattrell Jones had 18 for the Colonels. Lyons, who was 0-for-9 on 3s entering the game, made all three of his attempts beyond the arc.

“That gave them a boost when he knocked those shots down,” Painter said. “Gordon is tough to handle when he gets hot. You have to do a better job than we did.”

Purdue took a 55-36 lead into halftime but allowed Nicholls State to hang around in the second half thanks to outside shooting. The Colonels shot 58% from the field after halftime and finished the game 16 of 35 (45.7%) from 3-point range.

“Both teams did well offensively,” Painter said. “They were making some tough shots. It just depends how you look at it with some of the breakdowns we had. They took advantage of us when we didn’t break down. I asked our team afterwards, if the ball is not going in for us, how does this game unfold? We probably lose that game. Obviously, we shot the ball well and were able to go inside.”

The Boilermakers were the hotter team in the first half, shooting 59% to the Colonels' 38%.

The Boilermakers trailed 17-11 early after Gordon sank two 3-pointers to break an 11-all tie. Purdue responded with 20 unanswered points to take a 31-17 lead. Nicholls State went more than four minutes without scoring.

Purdue forward Caleb Furst, who was averaging 6.2 points in nearly 22 minutes per game, was out because of health and safety protocols.

Nicholls State: This was the Colonels’ fifth game this season against a Power Five opponent, all losses. The Colonels came closest against Wisconsin, losing 71-68 on Dec. 15.

Purdue: The Boilermakers had a strong shooting effort, but will likely want to brush up on their perimeter defense before Big Ten action resumes.

STAT OF THE DAY

Purdue's 6-10 big man Trevion Williams led the team in rebounds (11) and assists (eight) and had no turnovers along with his nine points.

The Boilermakers had a 36-32 rebounding edge. Manny Littles had 11 rebounds for the Colonels.

The Boilermakers solidified their top-five ranking in their only game this week as they end nonconference play.