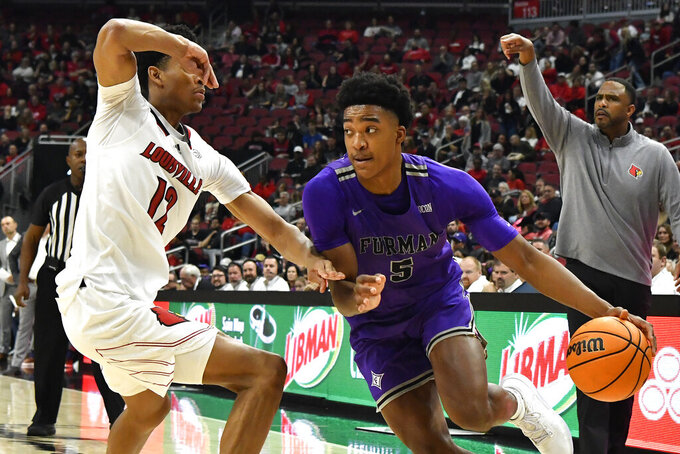 Garrett Hien added 18 points and Alex Hunter 17 to help the Paladins (2-0) post their first win over Louisville (1-1) in five all-time meetings, the previous one coming in 2002. Bothwell was two points short of his career high.

Louisville had slow starts to start the game and the second half but was able to recover both times to take leads. The Cardinals never got going in overtime with the Paladins scoring the first seven points. Noah Locke had all five of the Cardinals' points in overtime, including a 3-pointer with 54 seconds remaining. But those were Louisville's last with the Paladins finishing with four free throws.

The Cardinals started the second half shooting 1 of 15, and Furman used a 9-0 run to take a 47-42 lead. A 3-pointer by Withers put Louisville back in front with under 10 minutes left and they kept it until Hien completed a three-point play with just over a minute remaining and sent the game to overtime tied at 67.

After making only only one of their first eight shots to start the game, the Cardinals ended up shooting 52% in the first half in rallying to take a 39-35 halftime lead. But they finished the game at only 36%.

Furman, which made a school-record 22 3-pointers in a 111-66 win over North Greenville in its opener, was 12 of 28 from the arc, its 43% from distance better than the 39% it shot overall. The Paladins didn't have a 3-pointer in overtime and finished with three starters, including Bothwell and Hien, with four fouls.

Louisville made 7 of 29 3-point tries but more telling was Furman's 43-41 rebounding advantage despite the presence of Louisville's 6-foot-11 Malik Williams, who had a game-high 10 boards.

The Cardinals are playing their first six games without fourth-year head coach Chris Mack, who was suspended by the school for failing to follow university guidelines in the firing of ex-assistant Dino Gaudio last spring.