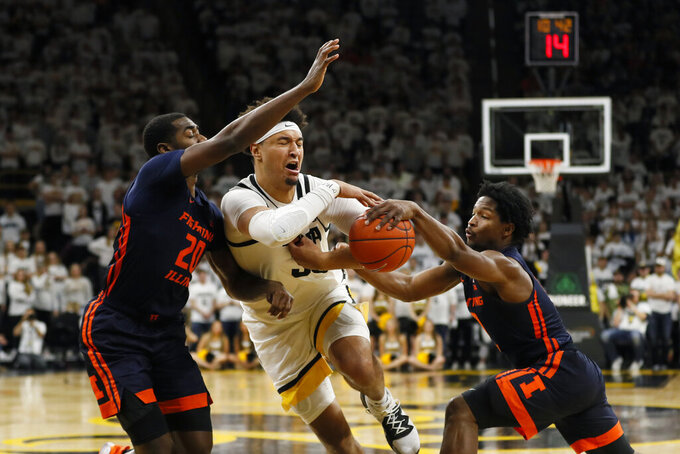 That foiled Illinois’ defensive plan against the Iowa junior center.

Garza, the Big Ten’s leading scorer, bounced back from a slow start to score 25 points and No. 18 Iowa clamped down in the final four minutes to beat No. 19 Illinois 72-65 on Sunday.

Garza, who added 10 rebounds for his 13th double-double of the season, didn't have a point in the first 15 minutes. He wound up making four 3-pointers on nine attempts, both career highs, and shot 9 of 16 overall.

The plan for the Illini against Garza was to be physical.

But Garza figured during the pregame scouting that Illinois 7-foot center Kofi Cockburn would stay inside against him. Cockburn, he felt, would be too strong for an all-day fight under the basket.

“I can’t really battle with him every time down,” Garza said.

So Garza, who came into the game with 22 3-pointers on 59 attempts, stepped outside and hit some key shots.

Garza’s first basket came with 4:53 left in the first half. He followed that with a 3-pointer 81 seconds later.

“When he got going at the end of the first half, he got going because he was getting offensive rebounds because we didn’t hit him,” Underwood said.

Garza had 11 points in a 13-2 run that erased an early eight-point lead from the Illini.

“I thought we did a better job of getting (the ball) to him,” Iowa coach Fran McCaffery said. “They were sitting in there on top of him. They made a decision to limit his touches.

“You know what? He can shoot 18 if he wants, as far as I’m concerned,” McCaffery said.

“I know I can make shots,” Garza said. “I felt like I could hit all night.”

“I thought, middle part of the second half, defensively we weren’t where we needed to be,” McCaffery said. “I thought we were substantially better after that. Coming down the stretch, to beat a team of this caliber, you have to execute. And execution is at both ends of the floor.”

Iowa made five of its last seven shots. Joe Wieskamp and CJ Fredrick each had 18 points for the Hawkeyes.

“Big Ten basketball at its finest, right there,” Underwood said. “They got the best of us today.”

Iowa has a five-game winning streak over the Illini, with the wins coming on four different courts — at Champaign and Iowa City in the regular season, and at New York and Chicago in the Big Ten Tournament.

The Illini fell back into a tie for first place with Michigan State. The Illini, Spartans and Maryland have three losses in conference play.

Iowa got back within one game of the Big Ten lead.

The Illini shouldn't fall in the poll -- they won at home against Minnesota on Thursday.

The Hawkeyes should also stay around where they're at -- they won two of three games this week, with the loss being at Maryland.

Illinois: The Illini play host to Maryland on Friday.