Hurley says UConn on schedule in 2nd year of rebuild 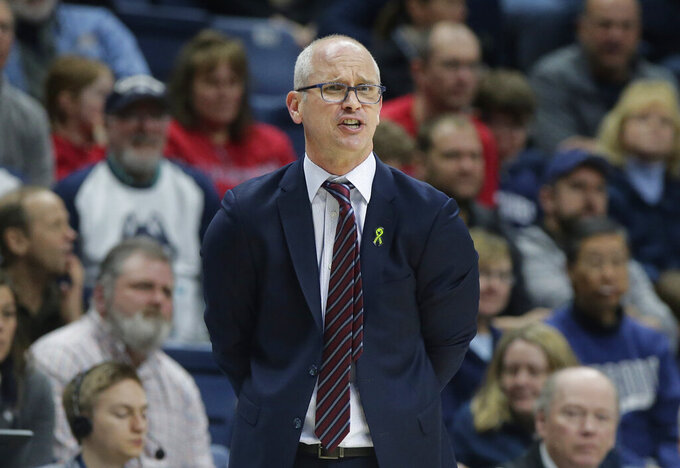 FILE - In this March 3, 2019, file photo, Connecticut head coach Dan Hurley shouts from the bench during the second half of an NCAA college basketball game against South Florida, in Storrs, Conn. Hurley expects UConn to be better this season, the second in the coach’s effort to rebuild the storied program back to national prominence. That doesn’t mean that Connecticut, which went 16-17 a year ago, will compete for a fifth national championship, but it should mean the Huskies will win more games than they lose. That’s something UConn has not done since 2015-16. (AP Photo/Steven Senne, File)

STORRS, Conn. (AP) — Dan Hurley expects UConn to be better this season, the second in the coach's effort to rebuild the storied program back to national prominence.

That doesn't mean that Connecticut, which went 16-17 a year ago, will compete for a fifth national championship. But it may mean the Huskies will win more games than they lose. That's something UConn has not done since 2015-16.

"I've been through year twos before," said Hurley, who turned both Wagner and Rhode Island into winning programs. "I've been through this process of taking over a program that's fallen on hard times. I'm not sure how the casual fan feels, but I feel we're right where I hoped we'd be when I stood there for my opening press conference."

Hurley has brought in a handful of recruits who could help right away— forwards Akok Akok and Richard Springs and guards Jalen Gaffney and James Bouknight. But Bouknight faces legal problems and a possible suspension after acknowledging he fled from police following a one-car crash in September. Another guard, R.J. Cole, transferred to UConn from Howard, but won't be eligible until next season.

The coach expects the Huskies to rely on a core of players who have been here since before former coach Kevin Ollie was fired in the spring of 2018.

The team will be led by a pair of experienced guards, senior Christian Vital and Alterique Gilbert, who technically is a redshirt junior because of injuries, but is on track to graduate in June.

They will be joined by junior big man Josh Carlton, who shared last season's award as the American Athletic Conference's most improved player and wings Tyler Polley, another junior who Hurley says improved the most in the offseason, and St. John's transfer Sid Wilson.

Here are some other things to look for as UConn begins the 2019-20 season:

Vital could become the first UConn player in 32 years to fail and reach either the NCAA or NIT Tournament during a four-year UConn career.

He said playing late into March is motivating him this season.

"That's definitely the reason why I came to UConn," Vital said. "I don't plan on leaving without experiencing that."

UConn will be playing its final season in the American Athletic Conference, where the team has a record of 55-53 in the six seasons since it formed out of the remnants of the old Big East. The Huskies will join the new Big East next year. But Hurley brings a poster of the AAC Conference trophy to practice as a reminder of what his team is working for this season.

"We take that (poster) when we go eat, in the locker room," said Bouknight. "It's basically a sign to make sure we're doing the right things to reach that goal."

The coach expects his team to play a more up-tempo style of basketball this season.

"We're a high-paced team," Akok said. "We're going to run up and down the floor and we're going to play defense."

The 6-foot-11 Akok, who joined the Huskies last winter but didn't play, is expected to give the UConn a shot blocker for the first time since Amidah Brimah played in the middle three years ago.

The Huskies open the season on Nov. 8 against in-state opponent Sacred Heart. UConn has an important out-of-conference game against No. 6 Florida at Gampel Pavilion on Nov. 17 They could face the Gators again later that month if things break that way in the Charleston Classic. That's a tournament that also includes No. 19 Xavier, Miami, Saint Joseph's, Missouri State, Towson and UConn's first-round opponent, Buffalo.

UConn's other big non-conference game comes against Indiana on Dec. 10.