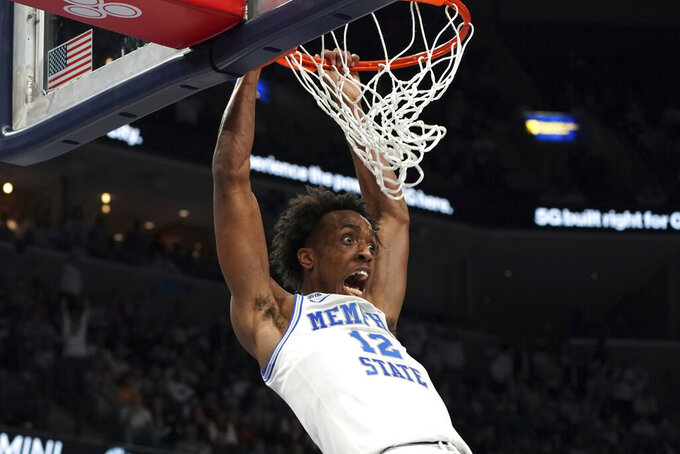 Landers Nolley added 13 points for Memphis (6-4), which came into the season with a highly touted recruiting class and topped out with the No. 9 ranking in the AP Top 25. But the Tigers got pounded by Iowa State and lost close games to Georgia, Ole Miss and Murray State to fall out of the poll.

“I’m definitely enjoying every moment of this,” Memphis coach Penny Hardaway said. “This team is together now.”

“We didn’t come ready to play,” Alabama coach Nate Oats said. “That’s on the coaching staff. Give a ton of credit to Memphis. We tried to tell our guys that we were going to get Memphis’ best shot.”

Memphis had a players-only meeting after the loss to Murray State.

“We knew we had to come together,” Williams said. “We really let everything out.”

Alabama finished with 20 turnovers and couldn’t generate consistent offense after halftime. Memphis led 37-32 after a back-and-forth first half.

“We just tried to revert back to our winning ways,” Nolley said.

Alabama: The Crimson Tide were on a roll, having won four straight, including victories over ranked foes Gonzaga and Houston. Oats refused to blame the emotional 83-82 win over the Cougars for his team’s poor performance.

“We had multiple guys not play their best basketball game,” Oats said.

Memphis: The losing streak led to questions about the team’s chemistry, desire and discipline. None of that looked like a problem against Alabama.

Thanks to those big victories over Gonzaga and Houston, Alabama’s resume is strong enough that it shouldn’t drop too far in the poll.

Memphis still has a long way to go before it’s considered for a spot in the AP Top 25.

ALL IS NOT LOST

Alabama would begin Southeastern Conference play with a 10-2 record if it can beat its next two opponents, Jacksonville State and Colorado State.

That would "have been a decent record with the schedule we had,” Oats said. “But after our first nine games, you would like to have gotten this one.”

“I’d rather not lose, so I think it’s better if you can take your lessons off wins. We got what we deserved tonight, I know that. We didn’t come ready to play. We didn’t play as hard as them. They played a lot harder than us,” Oats said.

He added: “Hopefully, it can recalibrate some guys. I wish we were mature enough that we didn’t need it. If we can’t get recalibrated after this one, we’ve got more issues than I thought.”

Memphis: Faces No. 18 Tennessee on Saturday in Nashville.