No. 18 Missouri holds off frantic rally, tops No. 10 Alabama 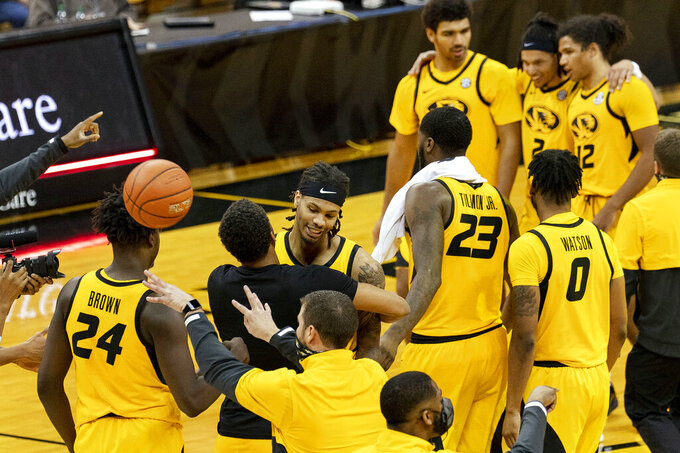 COLUMBIA, Mo. (AP) — Way ahead, it looked as if No. 18 Missouri might beat 10th-ranked Alabama in a laugher.

The joke was almost on the Tigers.

Dru Smith and Missouri built a 22-point lead in the second half, then held off a frantic rally by the Crimson Tide for a 68-65 victory on Saturday.

The Tigers held their largest lead with 13:05 left and were still up by 20 with less than six minutes remaining.

“Our guys started settling, because they looked at the score instead of finishing the game on the floor,” Missouri coach Cuonzo Martin said. “You can’t do that with this level of team. But on the flip side, tremendous execution defensively down the stretch on the last possessions.”

Missouri's only points down the stretch came on four free throws. The Crimson Tide started scoring on nearly every possession and Herb Jones had two chances to give Alabama the lead in the final 20 seconds, but he missed a layup and had another try blocked by Mitchell Smith.

The Crimson Tide had one last chance to tie it, but Jaden Shackelford’s contested 3-pointer at the buzzer missed.

“We’re a bunch of gritty types of dudes, and it starts at the top,” Mitchell Smith said.

“We couldn’t have asked for a much better effort in the last 13 minutes,” coach Nate Oats said. “If we get that effort for 40 minutes, we win the game.”

The Tigers built their lead by outrunning the Crimson Tide in transition and outmuscling them inside. Missouri finished with 46 points in the paint.

Alabama is a volume 3-point shooting team, and when the Crimson Tide missed, Missouri started fast breaks with long rebounds. The Tigers scored 13 fast-break points in the first half and took a 44-28 lead at intermission.

It got worse before it got better for Alabama, which got 12 points apiece from Jaden Quinerly and Keon Ellis. Alex Reese and James Rojas missed dunks for the Crimson Tide and the team was just 11 of 23 on layup attempts and only 12 of 21 on free throws.

Alabama: Despite the loss, the Crimson Tide remain in firm control of the SEC race and have a good opportunity to pull away from the pack in the next two weeks with four straight games against teams in the bottom half of the standings.

Missouri: The Tigers, who were picked 10th in the SEC preseason poll, are alone in second place in the league. The victory over Alabama was Missouri’s third this season against a team ranked in the AP top 10 at the time of the game.

Mitchell Smith is a wiry 6-foot-10 reserve forward whose value to Missouri is not always evident in the box score. Brown called Smith “a Swiss Army knife” because he can do so many things, and Martin had his own product comparison.

“Mitch is like the American Express Card,” Martin said. “You can’t leave home without him.”

Martin wanted Smith on the floor late in the game in place of his more celebrated big man, Jeremiah Tilmon, because Smith was quick enough to guard multiple players in Alabama’s small lineup. That move paid off when Smith swooped in and blocked Jones’ shot from behind with four seconds left.

“You always dream about stuff like that, but it was just another play that helped my team win,” Smith said. “I did my job. Now we can move on to the next game.”

Alabama trailed Oklahoma 11-2 early in a 66-61 loss on Jan. 30 and trailed Missouri for the vast majority of the game.

“The common thread is we’re not ready to play in the first half,” Oats said.

Alabama: The Crimson Tide travel to South Carolina on Tuesday.