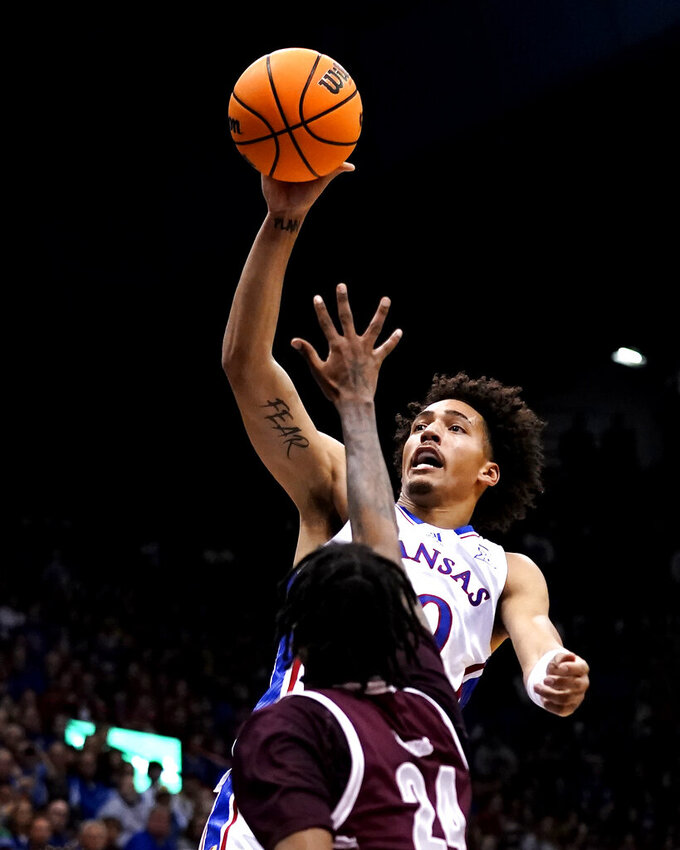 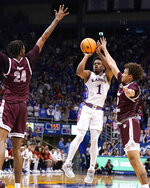 LAWRENCE, Kan. (AP) — Kansas freshman MJ Rice has been through the ringer in his first couple of months of college basketball: the back injury during preseason practices, a bout with COVID-19 and then kidney stones last week that sent him to the ER.

The five-star recruit showed Monday night what he can do when he's healthy and available.

Rice came off the bench to score 19 points, Jalen Wilson hit five 3-pointers and scored 22, and the ninth-ranked Jayhawks bounced back from their first loss of the season with an 87-55 rout of Texas Southern.

“Just coming in and doing my job, really, whether that's bringing energy or playing defense,” Rice said afterward. “I know I missed some time but it's also kind of like a build-up. I have to get that rhythm back.”

Gradey Dick added 15 points, Josef Yesufu had 14 and KJ Adams 10 for the Jayhawks (7-1), who stumbled against No. 13 Tennessee in the championship game of the Battle 4 Atlantis. They are now 109-16 after a loss under coach Bill Self, who made his regular-season debut in Allen Fieldhouse after missing three home games to a school-imposed suspension.

“I thought it was probably pretty good overall,” Self said, “considering we were tired, and we hadn’t practiced since we played Tennessee. I thoguht that was about as good as we could do.”

Davon Barnes had 22 points and Zytarious Mortle scored 11 for the Tigers (1-7), whose brutal nonconference schedule has taken them to Texas Tech, Houston and Auburn with a trip to Wichita State still to come.

Texas Southern coach Johnny Jones was not available after the game.

It was a rematch of a first-round NCAA Tournament game last season won by the Jayhawks on their way to the national championship. And for a stretch in the first half, the Tigers gave the champs all they could handle.

Texas Southern was still within 14-10 midway through the first half when Kansas ripped off a 15-2 run to seize control. But even during the spurt, the Jayhawks at one point missed three straight shots, failed to capitalize on turnovers and couldn't salvage much of an advantage on the boards against a much smaller team.

Kansas even gave up a buzzer-beating 3 that got the preseason SWAC favorites within 40-25 at halftime.

“Defensively we were not very good early,” Self said, “and they missed a lot of layups.”

If there was any drama left, it evaporated in the opening minutes of the second half. Texas Southern turned it over four times in its first five possessions, Kansas ripped off a 14-2 run and Self eventually was able to examine his bench.

TV play-by-play man Dave Armstrong signed off for the last time after a 38-year career broadcasting the NBA, Major League Baseball, college football and college basketball. He's been a staple in the Big 12 since 1988, when it was known as the Big 8, and regularly called games in the Big East, the Big Ten and the ACC.

Kansas forward Kevin McCullar Jr., who is averaging 9.7 points and 7.3 rebounds, watched the game in street clothes with a minor groin injury. Backup guard Bobby Pettiford Jr. was out with a hamstring injury.

Texas Southern couldn't overcome 16 turnovers and a poor night from the 3-point arc, where the Tigers were 4 of 17. They also got just six points off the bench, and their lack of depth was evident as they wore down in the second half.

Kansas was 13 of 29 from the arc, and many of the shots came off open looks courtesy good ball movement. The Jayhawks had 23 assists on 30 made shots, including six assists from Wilson and nine from Dajuan Harris Jr.