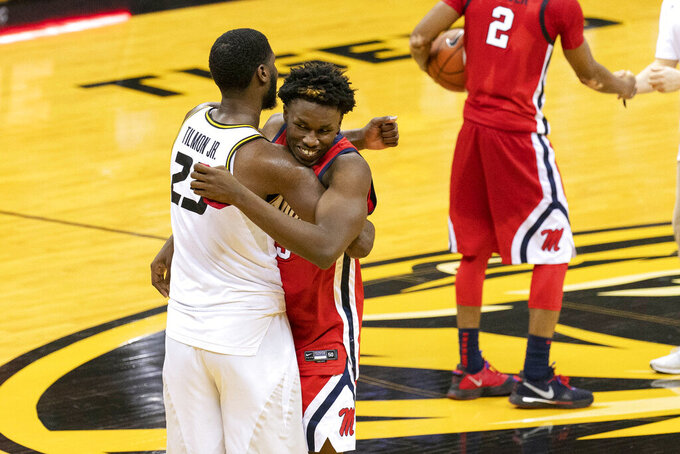 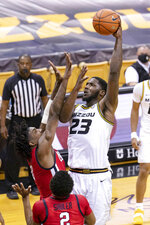 Joiner hit six free throws in the final 46 seconds to seal the rematch as the Rebels held off the Tigers’ second-half charge.

“It was a good way for us to win it,” Ole Miss coach Kermit Davis said. “It’s great to get Jarkel the ball. He and Devontae Shuler are our very best free-throw shooters. ... He just stepped up there and (hit) key free throws, one after the other.”

Kobe Brown led Missouri (14-7, 7-7) with 12 points while Mark Smith added 11. Jeremiah Tilmon had 10 points and 10 rebounds, his seventh double-double of the season.

Ole Miss led by nine points at halftime and pushed ahead by as many as 13 early in the second half. But Missouri went on a 15-2 second-half run while the Rebels endured a brutal 8:26 stretch without a field goal, pushing the Tigers ahead 43-41 for their first lead with 9:25 left.

Neither team led by more than a possession from there until Shuler and KJ Buffen hit consecutive buckets to give Ole Miss a four-point lead with 1:18 to go. The Rebels closed out the game with a 10-3 run.

“I think more than anything, it was getting stops,” Missouri coach Cuonzo Martin said of his team's struggles in the closing stretch. “Of course, make baskets, and then you try to get stops. ... It was a four-point swing, and then it kind of went from there. But of course, it’d be getting stops, then making baskets.”

Ole Miss shot 3 for 11 from 3-point range (27%), its third consecutive game of 30% or worse from beyond the arc. But the Rebels were helped by getting 14 second-chance points off 15 offensive rebounds.

The victory was critical for the Rebels' NCAA Tournament hopes.

“That was huge for us,” White said. “I was locked in. I had great sleep, just prepared myself to have a good game today. I knew how big this game was, I just knew my team was together.”

Shuler is becoming one of the SEC’s most consistent players. After a four-point outing against Mississippi State last weekend ended a streak of 10 games in double figures, the senior returned to form.

Missouri has lost five straight games to teams from Mississippi dating back to last season. The Tigers' last victory over a team from the state was against Ole Miss on Feb. 18, 2020.

Ole Miss: The Rebels have won five of six, their best stretch since starting the season 5-1. That run has included three wins against AP Top 25 teams — on Feb. 2 against Tennessee and twice against Missouri.

Missouri: Has lost four of its last five games as its NCAA Tournament stock continues to drop, with each of those losses to unranked foes. The Tigers’ 53 points tied a season low, and they shot 35% from the field, their second-worst performance of the year.

Ole Miss: At Vanderbilt on Saturday.